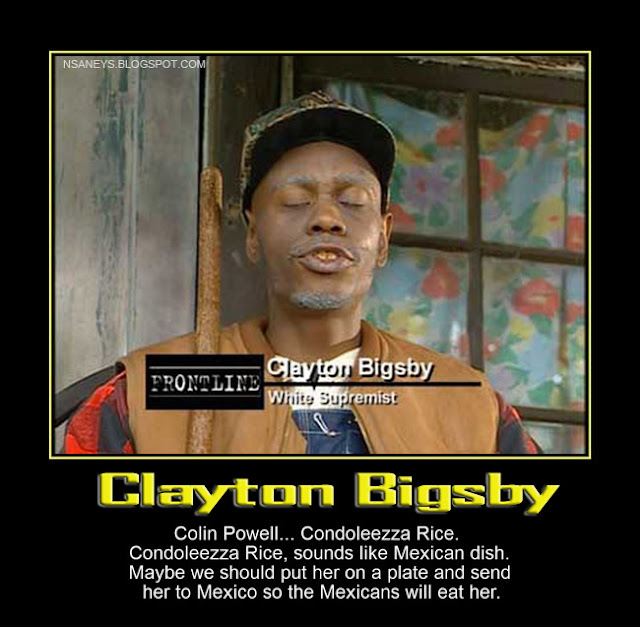 Frontline – A spoof of the PBS series Frontline. The first Frontline sketch, Blind Supremacy, featured the life of Clayton Bigsby (played by Chappelle), a biography of a blind white supremacist who is not aware that he is actually a black man. This sketch was part of the first episode and garnered attention for its extensive use of the n-word  (mostly spoken by Chappelle's character).[7] The sketch has been compared to the iconic Saturday Night Live sketch from 1975 featuring Chevy Chase and Richard Pryor which received similar reactions for its use of the word.

Chappelle's Show is an American sketch comedy television series created by comedians Dave Chappelle and Neal Brennan, with Chappelle hosting the show as well as starring in various skits. Chappelle, Brennan and Michele Armour were the show's executive producers. The series premiered on January 22, 2003 on the American cable television network Comedy Central. The show ran for two complete seasons and a third, truncated season (dubbed "The Lost Episodes").

After numerous delays, production of the third season of the show was abruptly ended when Chappelle left the show. Three episodes were compiled from the completed work and these episodes aired from July 9 to July 23, 2006. Re-runs frequently air on Comedy Central and around the world on MTV in Germany, Comedy Central in Brazil, The Comedy Network in Canada, The Comedy Channel and 7mate in Australia and FX in the United Kingdom.

Chappelle's Show was also shown on WGN America and was syndicated to various television stations across the U.S. including MyNetworkTV. TV Guide ranked it #31 on their list of "TV's Top 100 Shows". -Wikipedia