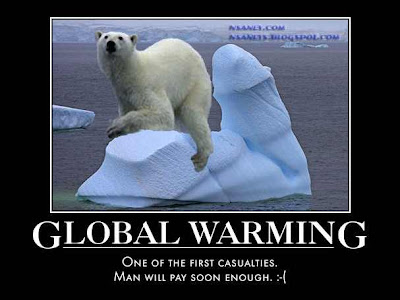 
The IUCN, Arctic Climate Impact Assessment, United States Geological Survey and many leading polar bear biologists have expressed grave concerns about the impact of climate change, including the belief that the current warming trend imperils the survival of the species.

The key danger posed by climate change is malnutrition or starvation due to habitat loss. Polar bears hunt seals from a platform of sea ice. Rising temperatures cause the sea ice to melt earlier in the year, driving the bears to shore before they have built sufficient fat reserves to survive the period of scarce food in the late summer and early fall.[83] Reduction in sea-ice cover also forces bears to swim longer distances, which further depletes their energy stores and occasionally leads to drowning.[123] Thinner sea ice tends to deform more easily, which appears to make it more difficult for polar bears to access seals.[56] Insufficient nourishment leads to lower reproductive rates in adult females and lower survival rates in cubs and juvenile bears, in addition to poorer body condition in bears of all ages.[27]
Mothers and cubs have high nutritional requirements, which are not met if the seal-hunting season is too short.

In addition to creating nutritional stress, a warming climate is expected to affect various other aspects of polar bear life: Changes in sea ice affect the ability of pregnant females to build suitable maternity dens.[24] As the distance increases between the pack ice and the coast, females must swim longer distances to reach favored denning areas on land.[27] Thawing of permafrost would affect the bears who traditionally den underground, and warm winters could result in den roofs collapsing or having reduced insulative value.[27] For the polar bears that currently den on multi-year ice, increased ice mobility may result in longer distances for mothers and young cubs to walk when they return to seal-hunting areas in the spring.[27] Disease-causing bacteria and parasites would flourish more readily in a warmer climate.[56]

Problematic interactions between polar bears and humans, such as foraging by bears in garbage dumps, have historically been more prevalent in years when ice-floe breakup occurred early and local polar bears were relatively thin.[118] Increased human-bear interactions, including fatal attacks on humans, are likely to increase as the sea ice shrinks and hungry bears try to find food on land.[118][124]
A polar bear swimming

The effects of climate change are most profound in the southern part of the polar bear's range, and this is indeed where significant degradation of local populations has been observed.[122] The Western Hudson Bay subpopulation, in a southern part of the range, also happens to be one of the best-studied polar bear subpopulations. This subpopulation feeds heavily on ringed seals in late spring, when newly weaned and easily hunted seal pups are abundant.[113] The late spring hunting season ends for polar bears when the ice begins to melt and break up, and they fast or eat little during the summer until the sea freezes again.[113]

Due to warming air temperatures, ice-floe breakup in western Hudson Bay is currently occurring three weeks earlier than it did 30 years ago, reducing the duration of the polar bear feeding season.[113] The body condition of polar bears has declined during this period; the average weight of lone (and likely pregnant) female polar bears was approximately 290 kg (640 lb) in 1980 and 230 kg (510 lb) in 2004.[113] Between 1987 and 2004, the Western Hudson Bay population declined by 22%.[125]

In Alaska, the effects of sea ice shrinkage have contributed to higher mortality rates in polar bear cubs, and have led to changes in the denning locations of pregnant females.[82][126] In recent years, polar bears in the Arctic have undertaken longer than usual swims to find prey, resulting in four recorded drownings in the unusually large ice pack regression of 2005.

PollutionPolar bears accumulate high levels of persistent organic pollutants such as polychlorinated biphenyl (PCBs) and chlorinated pesticides. Due to their position at the top of the food pyramid, with a diet heavy in blubber in which halocarbons concentrate, their bodies are among the most contaminated of Arctic mammals.[127] Halocarbons are known to be toxic to other animals, because they mimic hormone chemistry, and biomarkers such as immunoglobulin G and retinol suggest similar effects on polar bears. PCBs have received the most study, and they have been associated with birth defects and immune system deficiency.[128]

The most notorious of these chemicals, such as PCBs and DDT, have been internationally banned. Their concentrations in polar bear tissues continued to rise for decades after the ban as these chemicals spread through the food chain. But the trend seems to have abated, with tissue concentrations of PCBs declining between studies performed from 1989 to 1993 and studies performed from 1996 to 2002

Oil and gas development in polar bear habitat can affect the bears in a variety of ways. An oil spill in the Arctic would most likely concentrate in the areas where polar bears and their prey are also concentrated, such as sea ice leads.[7] Because polar bears rely partly on their fur for insulation and soiling of the fur by oil reduces its insulative value, oil spills put bears at risk of dying from hypothermia.[62] Polar bears exposed to oil spill conditions have been observed to lick the oil from their fur, leading to fatal kidney failure.[62] Maternity dens, used by pregnant females and by females with infants, can also be disturbed by nearby oil exploration and development. Disturbance of these sensitive sites may trigger the mother to abandon her den prematurely, or abandon her litter altogether.

PredictionsThe U.S. Geological Survey predicts two-thirds of the world's polar bears will disappear by 2050, based on moderate projections for the shrinking of summer sea ice caused by climate change.[56] The bears would disappear from Europe, Asia, and Alaska, and be depleted from the Arctic archipelago of Canada and areas off the northern Greenland coast. By 2080, they would disappear from Greenland entirely and from the northern Canadian coast, leaving only dwindling numbers in the interior Arctic archipelago.[56]

Predictions vary on the extent to which polar bears could adapt to climate change by switching to terrestrial food sources. Mitchell Taylor, who was director of Wildlife Research for the Government of Nunavut, wrote to the U.S. Fish and Wildlife Service arguing that local studies are insufficient evidence for global protection at this time. The letter stated, "At present, the polar bear is one of the best managed of the large Arctic mammals. If all Arctic nations continue to abide by the terms and intent of the Polar Bear Agreement, the future of polar bears is secure ... Clearly polar bears can adapt to climate change. They have evolved and persisted for thousands of years in a period characterized by fluctuating climate."[114] Ken Taylor, deputy commissioner for the Alaska Department of Fish and Game, has said, "I wouldn't be surprised if polar bears learned to feed on spawning salmon like grizzly bears."[31]

However, many scientists consider these theories to be naive;[31] it is noted that black and brown bears at high latitudes are smaller than elsewhere, because of the scarcity of terrestrial food resources.[113] An additional risk to the species is that if individuals spend more time on land, they will hybridize with brown or grizzly bears.[122] The IUCN wrote:
“     Polar bears exhibit low reproductive rates with long generational spans. These factors make facultative adaptation by polar bears to significantly reduced ice coverage scenarios unlikely. Polar bears did adapt to warmer climate periods of the past. Due to their long generation time and the current greater speed of climate change, it seems unlikely that polar bear will be able to adapt to the current warming trend in the Arctic. If climatic trends continue polar bears may become extirpated from most of their range within 100 years. -Wikipedia
Posted by Nsaney at 12:48 AM