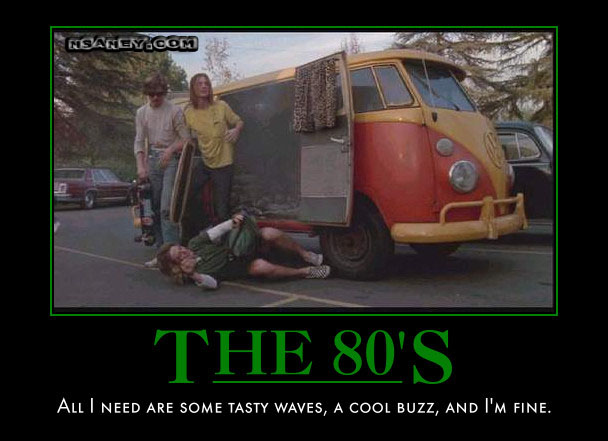 The stoner on the left is Anthony Edwards. -IMDb
You might know him better as Gilbert Lowell from Revenge of the Nerds. Or maybe as Goose from Top Gun starring little Tom Cruise. Or maybe Mike Monroe in Northern Exposure. More recently he played Dr. Mark Greenein the hit TV show ER.

The stoner on the right is Eric Stoltz. -IMDb
You may know him better as Cher in the.. Okay that was mean of me. He also played Roy L.'Rocky' Dennis in the movie Mask (The Elephant Man). He was also William Dunn in Grey's Anotomy and  Lance in Pulp Fiction...

All I need are some tasty waves, a cool buzz, and I'm fine.
People on 'ludes should not drive!
Hey bud, let's party!
Aloha Mr. Hand!